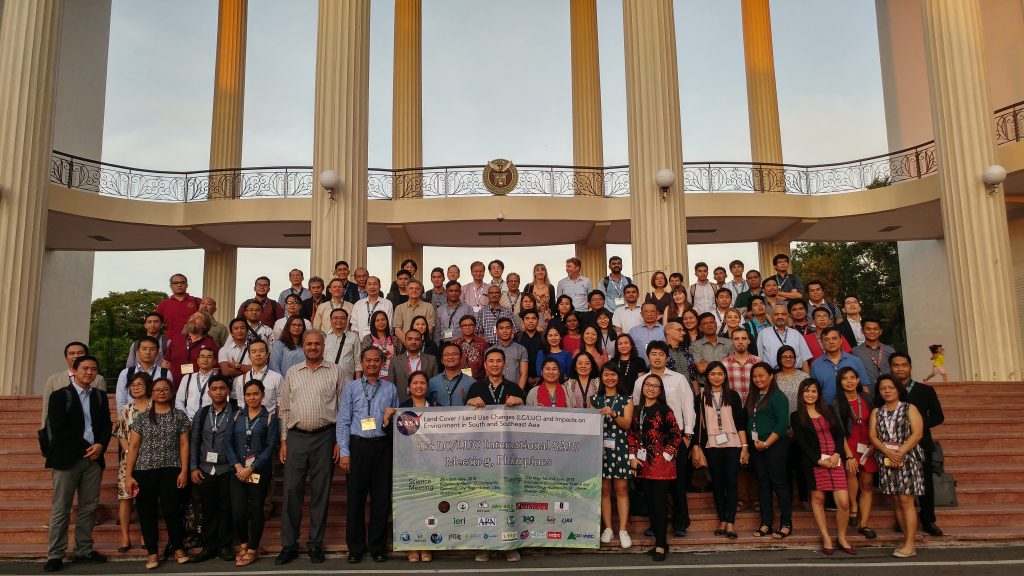 ‘CRITICAL MASS.’ Participants and presenters of the NASA LC/LUC SARI conference and training in front of Quezon Hall of the University of the Philippines Diliman. The SARI Conference has brought together the foremost environmental scientists of the world, including Bangladesh, China, France, Germany, India, Indonesia, Japan, Lao PDR, Malaysia, Nepal, Pakistan, Singapore, Spain, Taiwan, Thailand, the US, UK Vietnam, and the rest of South and Southeast Asia under one roof in a six-day talk and training in Quezon City.

THE PHILIPPINES has recently hosted its first-ever NASA Land Cover/Land Use Changes (LC/LUC) and Impacts on Environment in South and Southeast Asia International Regional Science Meeting of the South/Southeast Asia Research Initiative (SARI), which was held at the Richmonde Hotel, Libis, and the University of the Philippines Diliman, both in Quezon City.

SARI was a six-day event, which started May 28, and was comprised of three days of seminars and three days of training for young scientists on the use of remote-sensing methods.

The meeting was attended by hundreds of scientists, environmental experts, and mosty hail from the Southeast and South Asian region, who discussed on several issues, like the rapid depletion of natural land into converted agricultural and urban zones, including its implications and profound effects on the ecosystem, but most especially the different advanced tools in monitoring these changes, such as the use of satellites for land or water changes, drones for crop and farmland conditions, environmental mapping, and remote air quality monitoring, akin to that of PAGASA’s climate monitoring.

SARI is under NASA’s Earth Sciences Division. The six-day meeting was organized by Krishna Vadrevu, Ph.D. from NASA, with local organizers Mylene G. Cayetano, Ph.D. and Gay Jane Perez, Ph.D., of the Institute of Environmental Science and Meteorology of the University of the Philippines Diliman (UP-IESM).

“This year’s theme of SARI is on the impacts of urbanization and land conversion on the atmosphere, agriculture, and water resources. We’ll also focus on biomass burning, including land-atmosphere interactions, and the urbanization and use of forests and mountain regions,” said Cayetano, who is one of the PH’s foremost experts in air and environmental pollution.

Remote sensing in the PH

But while the Philippines is just starting to nurture its remote sensing capabilities, the pinnacle of which is the Diwata-1 microsatellite, it has no shortage of home-grown environmental scientists and experts.

According to Chris Justice, Ph.D., Chairman of the Department of Geographical Sciences of the University of Maryland, and one of the presenters of the SARI Science Meeting, there is a need to unify scientists from South and Southeast Asia, their data and researches into one repository to develop each country’s capability.

“[The SARI Science Meeting] is a development of a network of scientists on each of the topics here. Yes, they are being studied, but do we have critical mass to advance the science? In each country [of the region] there are few scientists, but combined, they form a critical mass of scientists. The idea of LC/LUC and SARI as a whole is to bring scientists from the region who are working on the same problems and to share their methods and experiences, that way we can help each other.

“It’s not like we do not have regulations [regarding land-use and land use change] in each country. We do have these regulations. However, what we need to achieve is to highlight the issues that these policies revolve on and involve the policy-makers so that they may have a better understanding of them,” said Vadrevu, who is also a professor from the University of Maryland.