Sunrise over the horizon The research assistants room at the sea-air interaction laboratory

The laboratory’s goal is to advocate that the study of weather and climate would be incomplete without studying the ocean. 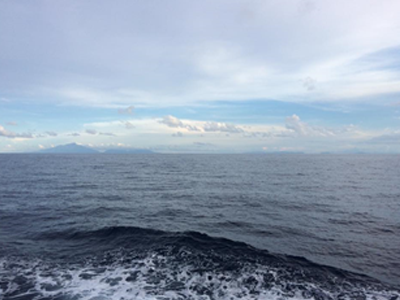 “The ocean remembers, being the memory of the climate system”.
-Walter Munk- 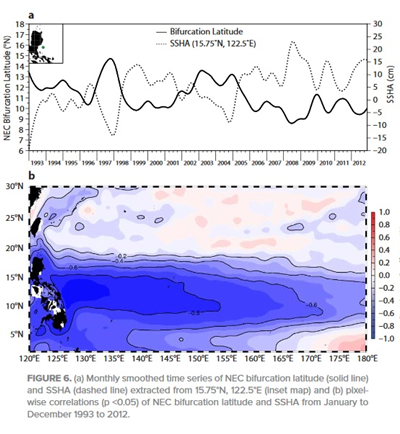 The upper ocean is important in understanding the weather systems as it exchanges heat, gases, and momentum with the atmosphere. One of the interesting dynamical features of the ocean near the Philippines is the bifurcation of the North Equatorial Current located at the eastern side of the Philippines. 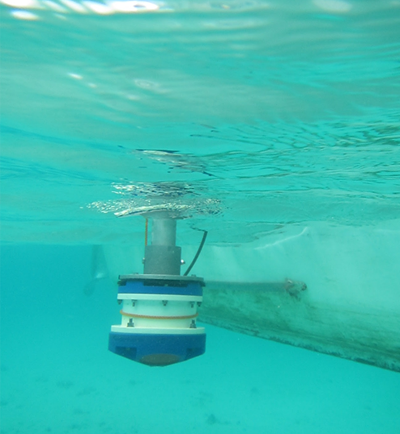 The Acoustic Doppler Current Profiler (ADCP) is one of the devices used for measuring ocean current velocities through the doppler effect of scattered sound waves in the water column. 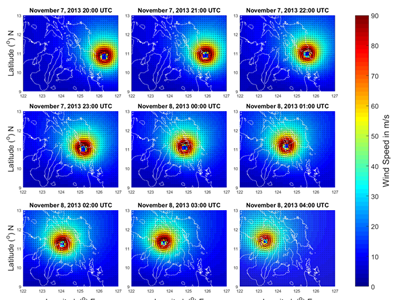 Wave generation is greatly influenced by the force of wind. The image shows the wind intensity of a passing cyclone, in this case Typhoon Yolanda of 2013, were the intense wind generated huge waves and storm surges. 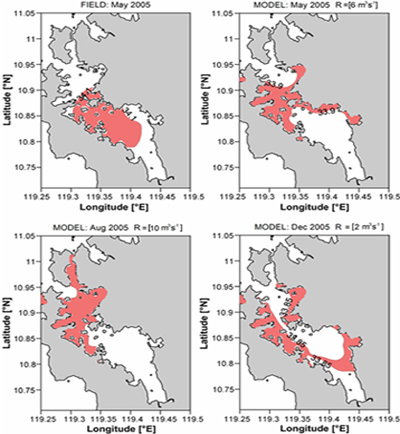 Models are decision support systems that transform complex physical phenomena to simplified versions that can explain, to some extent, the said phenomena. 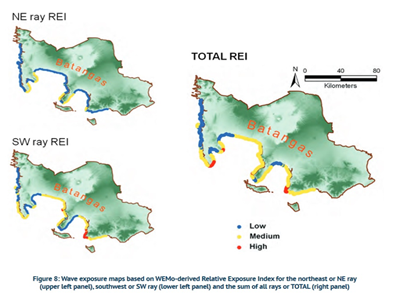 Wave exposure maps are proactive response to the impacts of battering waves that constantly affects our coastal communities. 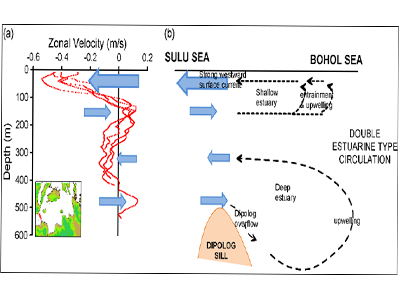 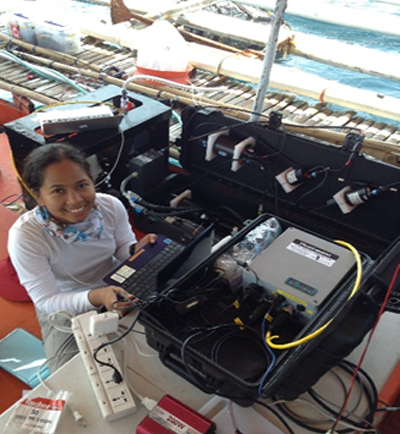 The Flow Through System device is comprised of several interdependent devices/sensors used for ocean optics data acquisition. This is a standard device in the sea-air interaction laboratory. 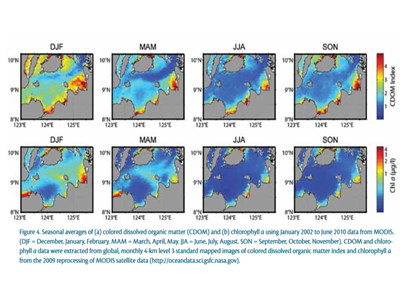 Chlorophyll a is one of the photosynthetic pigments in phytoplankton in the ocean. SAIL is also interested in studying phytoplankton pigments as a productivity indicator of the ocean waters.

Recent studies increasingly highlight the importance of air-sea coupled models for better representation of weather and climate systems. However, forecasts from coupled ocean-atmosphere models remain underutilized, particularly in the Philippines. In August of 2017, tropical cyclone (TC) Hato and Pakhar passed near the vicinity of Northwest Luzon, where a concurrent oceanographic cruise was being conducted to survey the Northwest Luzon Coastal Current. The response of the ocean and atmosphere due to TC passage as it passed the vicinity of the study area was thus examined using in situ, satellite, and Naval Research Laboratory’s Coupled Ocean/Atmosphere Mesoscale Prediction System for Tropical Cyclone (COAMPS-TC) model. Specifically, this study examined whether a cold wake was formed after the passage of TC Hato and whether the cold wake could weaken the subsequent TC Pakhar. The sensitivity of COAMPS-TC’s initial ocean conditions with and without Hato forcing on the Pakhar forecast was also assessed. Results show that a cold wake was formed after the passage of Hato, although the cold wake did not affect the intensity of Pakhar as the wake was found to be shallow, transient, and located north of Pakhar’s track. There was no weakening of this subsequent TC because the waters near the coast of NW Luzon that it passed through has relaxed back to warmer conditions. The COAMPS model was not able to capture the cold wake formation but overall showed too intense cooling after the passage of Hato. Incorporating Hato Forcing before the simulation of Pakhar showed better results for the track and intensity of Pakhar as well as the SST conditions before and after Pakhar passage. This means that the initial conditions of the ocean were important for COAMPS simulation and feedback of the ocean to the atmosphere is important to better forecast the track and intensity of TC. Some more experiments are recommended for future studies but this study shows the utility of coupled atmosphere-ocean models for Philippine TC forecasts.

Tropical cyclones (TCs) rank the deadliest amongst the natural hazards in the world, mainly because of the associated storm surges. In the Philippines, coastal areas in the east are said to be the most vulnerable but actual records have been sparse. In this study, data from 5 tide gauge stations in the eastern Bicol, Samar, and Leyte (Jose Panganiban, Virac, Catbalogan, Tacloban, and Guiuan) were analyzed to identify occurrence and magnitude of storm surge during the passage of 2016 TCs Carina (International name, Nida), Karen (Sarika), Marce (Tokage) and Nina (Nock-Ten). Meteorological data from synoptic stations and satellite data were also examined to determine the TC parameters that contributed to the surge. Water level abnormally above the predicted astronomical tides, defined as storm surge, were observed for TC Nock-Ten for stations closest and situated at or north of the TC track. Nock-Ten induced a 101.8 cm surge at Virac, highest among the tropical cyclones due to intensified wind towards the coast (40 m/s). Tokage, Sarika, and Nida generated winds weaker than Nock-Ten and produced a surge of less than 50 cm. Interestingly, a 36.3 cm surge was recorded at Virac station a day after Tokage’s landfall. The cyclone’s winds interacted with the northeast monsoon, intensifying the easterly component of the wind as the eye of Tokage was 216 km from the station. For the subset of TCs studied, it has been found that high velocity winds towards the coast are crucial for storm surge to occur and that intensification of perpendicularly directed winds toward the coast may also induce elevated water levels even when the TC is way past the station location.

Intraseasonal variability in the tropics is modulated by Madden-Julian oscillation (MJO), a large-scale convective disturbance which propagates eastward across the equatorial Indian Ocean and western-central Pacific at a rate of 5 ms-1. Impact of MJO on Philippine rainfall during boreal winter months December to February of years 1987 to 2017 was studied using composite analysis of rainfall, convective and circulation anomalies. MJO events were identified using the Real-time Multivariate MJO (RMM) index, and days with strong MJO events were used for compositing and calculating anomalies for each MJO phase. Normally, Philippines experiences a northeasterly wind with convection mostly occurring in the Eastern Philippines. High amount of rainfall is experienced in the windward direction while places in the leeward direction receive no or less rainfall. However, rainfall was found to deviate from normal winter values coherent with the MJO phases, with generally negative anomalies during phases 1,2,3,7 and 8 (MJO convective center in Indian Ocean and western Hemisphere) and positive anomalies during phases 4-6 (MJO convective center in Maritime Continent and Western Pacific). The greatest impact of MJO occurred in type I and III climate regions (dry climate during boreal winter) which experienced enhanced (suppressed) rainfall during rainy (dry) phases of MJO. All rainy MJO phases showed a field significant rainfall enhancement while all the dry MJO phases except for phase 7 showed a field significant rainfall suppression which means the impact of MJO on rainfall did not occur by chance. The impact of MJO on Philippine rainfall can be explained not just by the direct influence of tropical convective anomalies but also by the result of enhancement (suppression) of the winter monsoon, induced anomalous low (high) sea level pressure, rising (sinking) air and the eastward (westward) extent of the Western Pacific Subtropical High.

Rainfall is the most prominent climatic event in the Philippines. In this study,the influence of convectively coupled equatorial waves (CCEWs) to rainfall in the Philippines was investigated and quantified using 18-year long daily Outgoing Longwave Radiation (OLR) and rainfall from Tropical Rainfall Measuring Mission(TRMM) from year 1998-2015. Wavenumber-frequency filtering method was employed to isolate and filter the band signal of each CCEWs for a domain covering the Philippines, from 110oE to 130oE and 5oN to 20oN. Variance analysis was used to determine the contributions of CCEWs to rainfall variability for Philippine domain, and for the northern, central, and southern region. Also, the relationship between CCEWs events and ground-based rainfall from Philippine Atmospheric, Geophysical, and Astronomical Service Administration (PAGASA) synoptic station was analyzed for the year 2016.Kelvin, equatorial Rossby (ER), and mixed Rossby gravity (MRG) wave modulated Philippine rainfall variance by 3.36%, 4.19%, and 1.92%, respectively.Kelvin waves dominated the southern Philippines contributing about 3.9% of the total rainfall variance. It has two distinct peaks which occur during May –June, and December – January. The secondary peak of Kelvin waves was weaker compared to the primary peak. On the other hand, ER waves prevailed in the central Philippines with4.6% of the total rainfall variance. ER waves were relatively active throughout the year except for months of September –October. During July –August, the signals of ER waves were shifted to the northern Philippines. Similar to Kelvin waves, MRG waves also had its maximum modulation in southern Philippines with about 2.2% of the total rainfall variance. It also has two distinct peaks which occur during July and November.MRG waves peak during July was extended to northern Philippines. Ground-based data showed rainfall correlating with the OLR signals of the CCEWS. Rain occurred mostly during the passage of waves (i.e, 0 or no lag) particularly Kelvin waves and MRG waves. Active events of ER waves caused a lead to the rainfall in the northern Philippines and a delay in the southern Philippines. This study shows that CCEWs modulated the rainfall variance in the Philippines, with ER (MRG) waves showing greatest (least)influence and with southern Philippines being the most affected collectively by all three studied CCEWs during boreal winter

In the Philippines, intensity of typhoons is measured by maximum wind speed attained, with damage resulting mostly from the ferocious winds and sometimes torrential rains. However, typhoons also inflict damage by changing the onshore and offshore landscape at a faster rate than normal through morphological processes such as erosion and sedimentation. Typhoon Haiyan (Yolanda) is an intense typhoon that devastated the Visayas region in the Philippines on November 8, 2013. The coastal towns along San Pedro Bay were among the most affected when Typhoon Haiyan made landfall. An atmospheric forecast model (WRF) and an ocean model (Delft3D-Flow/Wave) were used to simulate the typhoon surge and sedimentological changes during and immediately after Haiyan. Parameterization of WRF atmospheric model focused on varying microphysics schemes and using the wind and pressure output from the best combination scheme as inputs for the Delft3D ocean model. In Tacloban City, a 2 meter surge was produced using WRF wind, compared to a 5 meter surge produced using input from best-track data of Joint Typhoon Warning Center (JTWC). The difference was due to the significantly weaker wind produced from WRF simulation. There are erosion and sedimentation hotspots in the coasts of San Pedro Bay, with Tacloban and Tanauan as areas with significant erosion and Basey with significant sedimentation. To some extent, hydrodynamic process, coastal erosion and sedimentation that led to the morphological changes in the study area were reproduced and is consistent with previous studies. This study is the first of its kind that tried to couple atmospheric, oceanographic, and sedimentological process in simulating the damage from Typhoon Haiyan.