A look back on the Department of Meteorology and Oceanography: Before the merger and beyond

The Institute of Environmental Science and Meteorology (IESM) is an academic unit of the College of Science in the University of the Philippines Diliman (UP). It was established in 2003 with the merger of the then Environmental Science Program (ESP) and the Department of Meteorology and Oceanography (DMO). As IESM celebrate its 15th founding anniversary this year, it is nice to look back.

The DMO began in 1968, then called Department of Meteorology. It was established through a World Meteorological Organization/United Nations Development Program (WMO/UNDP) Project and implemented under a UP/PAGASA (Philippine Atmospheric Geophysical and Astronomical Services Administration) Memorandum of Agreement. This year marks its 50th anniversary.

The first class of the course Introduction to Meteorology (Met 101) was offered during the second semester of school year 1967-1968. There were five students:
Eliseo Chan, Evelyn Gomez, Rodolfo (Rody) de Guzman, Theta Ponce and Linda Santiago, all physics majors. (See personal note below).

The class was taught by Dr Jorge G. de las Alas, the first faculty member of the Department of Meteorology. He obtained his Ph.D. in Meteorology from McGill University in Montreal, Canada. Then Dr Dominador C. Canlas joined later. He obtained his Ph.D. from New York University with specialization in Physical Oceanography. It was after his arrival that the Department was renamed Department of Meteorology and Oceanography. Dr Canlas was one of the post-war ‘pensionados’ (‘scholars’) sent abroad by the Philippine government to the United States for postgraduate studies in meteorology and related fields (as part of the post-war reconstruction program which started in the late 1940s). Others in this group were Isidro Cariño, Hugo de la Cruz, Mariano Estoque and Jaime Tecson.

Soon after the Department was founded, there was a position opened for an instructor.  Rodolfo A. de Guzman was recruited in early 1969. He was then granted a WMO fellowship under the WMO/UNDP project. He did his M.Sc. in Meteorology at the University of Reading’s Department of Geophysics in Berkshire, England from September 1969 to June 1970. Then he did his Ph.D., again under a WMO Fellowship, in the same University from January 1977 to May 1980. His postgraduate dissertations were on Tropical Cyclone Movement, Structure and Development. From 1972 to 1975, he was with PAGASA as Project Coordinator of the NSDB/PAGASA Typhoon Research Project led by the PAGASA’s head, Dr Roman L. Kintanar. He also served as a Weather Specialist in the then newly created Typhoon Moderation Research and Development Council (TMRDC). In November 1981, he joined the WMO as Chief of the Fellowships Branch in the Education and Training Department. He worked with WMO for 27 years in various positions, retiring in 2008 as Director, Strategic Planning Office and Special Adviser to the Secretary-General.

DMO offered undergraduate service courses in which students from different fields, including in Environmental Science, enrolled. It also offered M.S., Diploma and Ph.D. programs. It was designated as the University component of the WMO Regional Association V (Southwest Pacific) Regional Meteorological Training Centre (RMTC, later known simply as RTC).  Students from various countries in the Region and beyond came to DMO. Among others, there were students from Burma (now Myanmar), Indonesia, Taiwan and Thailand as well as from Costa Rica and Denmark.

The collaboration between PAGASA and DMO was mutually beneficial. Many senior PAGASA staff served in DMO in various capacities including as professorial lecturers. These included Ellaquim Adug, Jaime Bucoy, Cipriano Ferraris, Hugo de la Cruz and Jesus Flores. On the other hand, many of the current and former senior officials of PAGASA obtained their postgraduate degrees from DMO. This led to improvement of PAGASA’s operational and research capabilities in such areas as typhoon prediction, development of instability indices for thunderstorm forecasting and numerical weather prediction. PAGASA continues to benefit from these earlier developments.

This collaboration with PAGASA continued after DMO was transformed to form part of the IESM. The range of programs and activities has been expanded. It is noteworthy that current set of students come from various origins, geographically and in terms of their earlier disciplines. There is also enhanced support in terms of scholarships including from the Department of Science and Technology (DOST).

Following the approval of Republic Act 10692 in November 2015, PAGASA is embarking in a Modernization Program. It is hoped that this Modernization Program will also redound to the benefit of the IESM and its collaboration with PAGASA. Furthermore, in pursuit of excellence and greater service, IESM and PAGASA may wish to consider additional or strengthen existing strategic alliances such as with DOST, PCIEERD, NRCP, CHED and other institutions. It is a good indication that IESM chairs the Technical Panel for Meteorology in CHED as well as the Consortium for Meteorology Education and Training (COMET).

(PERSONAL NOTE: In the second semester of 1967-1968, the course Met 101 Introduction to Meteorology was first offered. Four physics majors enrolled taking the subject as an elective. As courses were to be dissolved if there were less than five students, Rody de Guzman was approached and encouraged to be the fifth student. Rody asked: ’What is meteorology?’ ‘The study of meteors’ was the reply. The subject was going to be taught at the PAGASA Planetarium located in the UP premises. So, it made sense that it was indeed about ‘meteors’. On the first day, Dr. de las Alas introduced the subject. The five physics majors looked at one another and mouthed the words ‘wrong course!’ The five stayed on anyway. And when the post of instructor for the Department was subsequently opened, the five were priority candidates. And that started Rody’s career in meteorology. This ties up to the alternative form of the saying: ‘To err is human, to forgive divine’; in the form of ‘To err is human, but isn’t it divine?’) 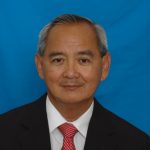